As default, WordPress actions put the jQuery scripts in the header of all HTML pages however, sometimes it is necessary to move these scripts to the footer of the page but a simple movement is impossible. As jQuery script (and dependents) is defined by WordPress during the first steps of its loading, when you try to redefine later its output through wp_enqueue_script( ..., $in_footer TRUE ) or similars, you haven’t got any result. 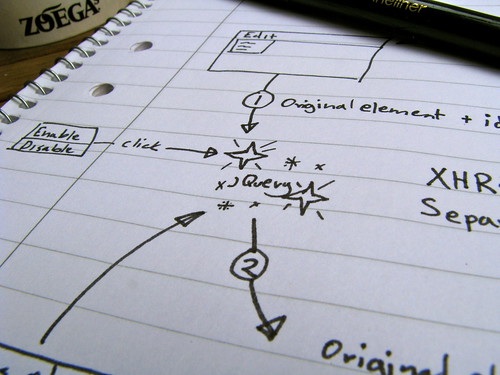 There are some methods to make this change, some more risky, others more conservatives. Today, I’m going to show two methods very simple and quite conservative based on just one function. It’s all you need.

For doing this, as the array registered[] is accessible by a named key, we can use a very simple function, something like that:

With this simple function we do actually change the behaviour of the output because all the elements related to the jQuery module are marked as in_footer, ie, group = 1.

See that it’s not enough redefining just jQuery script. After all, the WordPress jQuery script is just a trigger empty script for enqueueing jquery-core and jquery-migrate –the real scripts– so, if these two last scripts are not redefined too, then jQuery will keep in header because of this, it’s necessary to change the value for the three scripts: jQuery, jQuery-core and jQuery-migrate.

By the way, it’s always better, if you write this little function, to add a if ( ! is_admin() ) before the action because we don’t want to interfere with the WP admin interface so the final code would be like.

This is the basis of the change, to add the var group and set it up to 1, for moving each one of these scripts to the footer of the page.

But now, instead of dealing directly with $wp_scripts->registered[] array –it’s always dangerous–, we’re going to use the correct way for changing the properties of any script element of this array using the method add_data() included inside the class WP_Dependencies. So, the final function will be this next:

Just one more litle thing, don’t forget to fix the execution priority to 1 for the function send_jQuery_in_footer inside the WP action wp_head otherwise, the function will arrives late and the output of the jQuery scripts will have been already done inside HTML head.

Remember, the default WP priority 10 doesn’t work; it has to be 1.

This second method is, perhaps, less conservative because it avoids the loading of the WordPress original jQuery script, in fact, two files (jQuery-core and jQuery-migrate) and loads the public version jQuery file hosted by Google. In most of cases, it’s actually the same but, sometimes there is a little variation related with the version of jQuery and, of course, jQuery-migrate is not loaded. In any case, it’s also a good method and also puts the jQuery on the footer.

In this method, first we completely deregister the WordPress original jQuery script, and then we register and enqueue a new version of the jQuery. The second method is also just one function.

Although this method is the most widespread and famous –you can easily find a lot of similar examples on the web–, I’ve preferred to talk about it in second place for two reasons that I personally consider relevant:

Perhaps, you think that to include the version number inside the code is not a problem… And probably it’s right if you don’t have 50 WordPress client installations working with several themes… So, I advice you to think a little about your current installations before to choose this second method. It works but it can to need a lot of maintenance.

Before doing this change (with any of these two method), please, firstly check the behaviour and structure of the rest of the installed scripts by your theme because, if one of them works thanks to –for example– little inserted script code in the HTML tags (div, spans, etc, ) then the change of jQuery position will not be possible, or you must also change the behaviour of the rest of dependent scripts.

Always it’s complicated to move jQuery from to top to bottom, but it’s not impossible. If you have got time load issues for example, you probably ought to do it but, this movement is very structural because the behaviour of all web page components is affected so, you just need to do the changes step by step, and also check each one of these changes individually. If you work slowly, you get it.

Have a nice WordPressing!

5 Comments on How to move jQuery script to the Footer